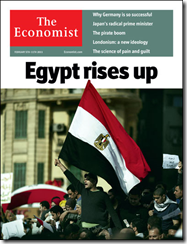 Despre Egipt in “When allies tumble” : “The American reluctance to move faster was not—or at least not only—a case of dithering. As the Mubarak regime’s patron and armourer, the Americans have had a tricky balance to strike. They could not be seen to abandon a longstanding ally at the first whiff of tear-gas. That would scare other loyal Arab allies, such as the kings of Jordan and Saudi Arabia, and risk ruining relations with Egypt if Mr Mubarak were somehow to hang on. Nor, though, could Mr Obama be seen to take the dictator’s side against the people. That would offend American principles and hurt relations with a successor regime if the people prevailed. Hence the public fence-sitting: Mr Mubarak is our ally, but we deplore violence and are on the side of “reform”, was the official State Department line as the demonstrators thronged Cairo.”

Pentru cei care regreta comunismul , iata la ce duce (Swap shop ) : “CUBA’S government likes to crow that over 85% of Cubans own their homes. The claim is technically correct. However, there is a catch: holding title to a property does not give you the right to sell it. The only legal way to move in Cuba is by swapping residences—a slow, bureaucratic and often corrupt process known as the permuta (“exchange”), which requires finding two roughly similar properties and getting state approval. To avoid this hassle, some Cubans prefer to marry the owner of a property, transfer the deed, and divorce. “